Posted on September 6, 2019 by Sara Crawford

Today one of my good friends, musician and singer/songwriter, Jonathan Pharis, stops by to talk creative process. Jonathan and I have been friends back since the open mic night I hosted at Cool Beans, and he’s one of the most talented songwriters I know.

So here you go, everyone. An interview with Jonathan Pharis.

What is your main form of creative expression?

I am a musician, living and playing in New York City. I sing and play guitar in my own band, The Newsreels, but I also play bass, synth, lead guitar, and sometimes mandolin for my friends here in the city!

Do you work as an artist/creative full-time or do you have a different day job?

Music is not a full-time job, yet, because the money is nowhere near as good as my job as an architectural designer/electrical engineer (and rent here is nothing to mess around with). I studied architecture in college, and I’ve always had a passion for buildings and construction. I could make this whole interview about that, but I think the music is maybe a bit sexier… I love the job because the pay is good, and the hours are always 8-4, so it doesn’t really overlap with when shows take place. And it provides the opportunity to use the other side of my brain: My job requires numbers and fractions and angles, and formulas and regulations. Music is the complement to that, where I get to sort of ignore the rules and be in the moment on stage. I don’t think I could do one without the other. My mind likes experiencing both sides during the day. I’ve also come to a point in my life where I feel as though the music will most likely always be something I do on the side. I might occasionally take a long “vacation” from work to go tour for a short time, but I don’t foresee a time when my music will be the way I pay the bills.

How long have you been creating music?

I’m 30 now, and I first got a guitar when I was 15, so about half my life I’ve been teaching myself little lessons through trial-and-error. I never had the initial dedication to just go get guitar lessons (or any music lessons whatsoever.) In middle school, I was already writing poetry, and then I finally REALLY listened to Johnny Cash, and started realizing that these little poems I was writing could tell a story in a really interesting way. I wrote my first song when I was 18, but it wasn’t until I was 21 that I finally went on stage at the old Woodstock Coffeehouse open-mic.

How do you find time to be creative when you have a separate day job?

I couldn’t yet imagine music being my full-time job. That feels like it would be a LOT of pressure to put onto something I love. I play with a lot of people who I can tell are well on their way to making it a career, but we are all still on what you would call the “amateur circuit” in NYC. I try to remind them (and myself) that this is when we should be having fun with playing music, because it’s very likely there’ll come a time when we’re beholden to a management company telling us we have to get in the van for three months. As far as the pressure, I don’t think I could be having this much fun if I wasn’t doing this in a city like New York. Nothing beats the convenience of being able to hop onto the subway, and sit down with a book or listen to a podcast and zone out for 30 minutes before a practice or show.

Do you engage in any additional creative hobbies? Are there any you’d like to try?

Graphic design. In school, most project presentations involved a lot of graphic design in order to make the building stand out on posters and renderings. My first architecture job involved a LOT of Photoshop and Illustrator work, and I’ve kept at it ever since. I try to make posters and flyers for friends whenever I can. Also, in the past year, I’ve started fixing old guitars, or repairing instruments my friends would otherwise throw away. I feel like it’s my little effort towards conservation if I can help keep an instrument from going in the dumpster. I also build guitar pedals, using these kits that a guy in Washington puts together and sends to you. You just solder them together and then you can paint them with whatever design you want, which is where the graphic design comes back into play!

Who are some other artists and creatives that inspire you to create?

The two big ones were Johnny Cash and Tom Petty. I fell in love with the music of both separately, and then I realized that Cash’s ‘Unchained’ album is just Johnny Cash & The Heartbreakers. I wanted to be both of them at the same time, so I obsessed over the songs, and learned the lyrics. When I finally bought a guitar at 15, the first song I learned was “Walk the Line”, the second was “Free Fallin'”. Locally, all of the friends I’ve made up here inspire me to play music I wouldn’t normally want to play. They force me to learn pop songs, and jazz progressions, and weird time signatures I’d never play on my own, and in return, I learn so much about music and theory. They keep me on my toes, and don’t let me get too comfortable, which is a good thing.

Why do you create?

I think, for me, and probably most people, its a voice inside you that you think never got heard. I’ve always felt that I had something in my mind that I could share with the world, but I never had the confidence to just say it out loud when I was younger, and so when I got the guitar, I realized I could carry it with me, and together we could preach to the masses whatever nonsense/truth my brain wanted to share. The other side of that is that I just like “creating” things. I love seeing something come together as a single piece of work where before there were only parts. As I learn new things, musically, I like seeing how those parts can fit together, or sit next to each other to create moods and emotions.

What advice do you have for other creatives?

Show up for your fellow creatives. There are a handful of musicians here who always come to the show, even if it’s on a Tuesday night at 10:00pm, and the L train is barely running. I feel indebted to them, and their effort to support me makes me want to support them. Not everybody will reciprocate, but eventually, you will hit a critical mass, and the support will always be there. Don’t underestimate the value of showing up. Go to their gallery opening, see their play, buy a ticket to whatever they’re selling. If I ever have free time (which is rare), I’m usually out at a friend’s show.

What are you working on right now?
An EP for my band, The Newsreels, which will include a few songs from the first part of my music life, as well as some songs I’ve been working on with the band, specifically. Also trying out some new synthy sounds with Siv Disa, which we can hopefully take on the road at some point next year.

Where can people find you and your work?

You can find my band, The Newsreels, on all the social medias (Facebook, ReverbNation) and the EP will be out before Christmas, I promise! You can listen on the streaming services, but if you buy it, I’ll share a drink or sandwich with you at a show! Also, I play guitar for my friend Evan Alexander Moore, who has a new album coming out, and bass for both Siv Disa and for Cat Rickman. We play shows all around NYC, so if you’re there, I’m probably on a stage that night, but we’re starting to line up shows along the East Coast soon!

Thanks for letting me pick your brain, Jonathan. I love what you said about the creative part of you that plays music and the math part of you in your day job and how you can’t have one without the other. 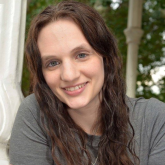